From Duelyst Wiki
(Redirected from Unlimited)
Jump to: navigation, search 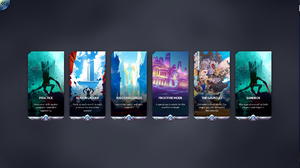 New players start with the Trainings grounds' tutorial in order to learn the basics of the game. Training grounds are also home to challenges where one must defeat the opponent in only one turn. Challenges are intended to improve a player's skill, and offer rewards upon completion. 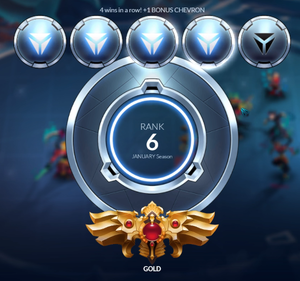 On ranked ladder, players compete against other players. Winning a game earns the player a chevron, while losing makes one lose a chevron (except in Bronze, where they don't lose chevrons). Upon gaining or losing enough chevrons, the player's rank is changed. There are 30 total ranks which make up 5 divisions, and a different number of chevrons is needed at each rank to reach the next one:

Ranks are reset each season. Seasons last from the first to the last day of every month.

Player gets rewards after season's end:

There is also a list with the Top 50 S-Rank players every month. 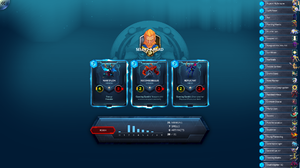 A deck being constructed in The Gauntlet

The Gauntlet is a game mode where one chooses a General and builds a deck out of random cards. In contrast to the other modes, entering The Gauntlet costs 150 gold, and rewards the player with increasingly valuable rewards depending on how many wins one achieves. Rewards include cards, orbs, gold and with at least 7 wins another Gauntlet ticket to start a new run. At 12 wins the rewards include one random crate.

Upon entering, the player is presented four random Generals that he or she may choose to play. Then, one constructs the deck by choosing one of three random cards until 30 cards have been assembled. The cards presented are not limited to what the player owns, and there is no limit to the number of copies of each card allowed in the deck.

A Gauntlet run ends when the player accomplishes 12 wins or reaches 3 losses. There is no obligation to play all Gauntlet games in a single game session, the player can log out, or play the Ranked Ladder, and then come back to the Gauntlet to pick up where he left off.

Gauntlet guides can be found here.

There is also a list with the Top 50 Gauntlet players every month. To qualify for that list you need to have done at least 20 runs.

Unlimited plays very similar to Ranked except that there is no ladder and therefore neither losing / winning chevrons nor monthly rewards. You can do your quests in this mode though and you get 15g for winning 3 games too. It also doesn't limit the cardpool to build your deck, so you can play with rotated cards.

Frostfire Mode was introduced for December 2017 to celebrate Christmas. It is an unranked mode in which you can play with your constructed decks but you can't lose ranks when you lose the match. During the match 'Holiday Presents' will spawn on the board on random locations which are 1 mana spells which will equip your general with a random artifact. Jingle Bells gives you Flying, Mistletoe makes all your cards 1 mana cheaper, Snowball gives you Ranged but decreases your Attack by 1 and Lump of Coal deactivates your Bloodbound Spell.

But be careful if you are too greedy and pick up too many presents extra minions can spawn for your opponent. These minions can be: Saberspine Tiger, Frostfire Snowchaser (2/1 with Ranged),Frostfire Imp (2/3 with Celerity).

NOTE: This mode is currently unavailable.

Rift was activated for the month of May 2017. It is a continuous draft format that starts with a starter deck for a given General, that is slowly upgraded by opening packs awarded within the format. You get to choose a General out of 4 options presented to you. Experience is awarded to your “Rift Run” (RR) as you play games (regardless of the outcome) and each time you level up you unlock an Upgrade (Your first run is free and comes with 5 upgrades). Upgrades come in the form of a pack of 6 cards (1 Legendary, 1 Epic, 2 Rares and 2 Commons) from which you can choose one card to replace a card that’s currently in your deck.

The card you replace is gone forever from your deck (unless you re-draw it in a pack and want to put it back in) and the new card is put into your deck. The other 5 cards disappear and won’t be seen again unless drawn in a new pack. Even cooler is that the cards don’t have to be from your faction/neutral card pool, they can be from any faction. This opens up huge possibilities for some funky deckstuffs. NOTE: These cards aren’t added to your collection, they only exist within the individual Rift Runs, so it is possible to use cards that aren’t in your collection in the Runs (similar to Gauntlet).

If you don't like the pack that you drew, you can reroll it for 25 Spirit. The cost of rerolling increases by 25 Spirit for every consecutive reroll on the same pack. However, if the pack is good, but not for the General you are currently using, you can store the upgrade, allowing it to be used in lieu of opening a pack in a later Rift Run. You can't use a Stored Upgrade (you have 10 slots for them) on another currently active Run.

Every Rift run starts with a rating/MMR of 400, that is increased/decreased by approximately 20-30 points each time you win/lose a game respectively. Matchmaking will attempt to pair you with an opponent with a similar rating and level (level is unconfirmed) After a game, a certain amount of experience is awarded. The experience required to advance a level increases as your levels increase (Experience required = level x 10).

If you are interested in videos of Rift runs watch this Youtube playlist. Here is an old basic guide about Rift mode.

NOTE: This mode is currently unavailable.

Sandbox mode allows the player to test two decks against each other. This can be used when trying to improve an old deck by directly comparing it to the new version, or to safely learn and test a deck against common ranked ladder decks. It also allows to test interactions between certain cards.

Sandbox also makes it possible to stage a desired screenshot.

It is possible to reactivate this mode with one of T2k5's scripts.