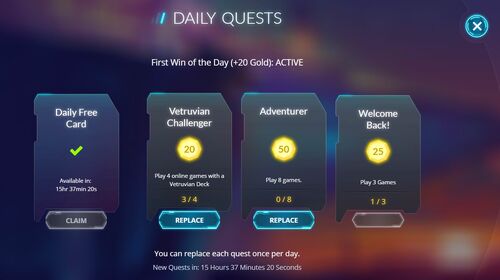 Quests reward players with gold for completing a set challenge on the Ranked ladder, in Rift Mode or in the The Gauntlet. Players can have up to two daily quests simultaneously. One of the quests is always a faction quest and the other one is either Ultimate Aggressor, Assassin or Adventurer. A single or both quests can be replaced once per day, and empty quest slots are refilled at a set time each day.

There is also the "Welcome Back!" Quest which players will get if they didn't finish all daily quests the day before. For every quest not finished the day before this quest gives 5 gold as a reward. For every day the quests are not finished it adds another 5g per quest to a maximum of 25 gold.

Players also get 15g for every 3 wins.