Since patch 1.68 cards can have a alternating cosmetic Version called "Prismatic". This alternation is indicated by a colored gradient in the card's background.

Prismatic Cards are special, rarer, shinier ‘foil’ versions of existing cards. Each card now exists in both a regular and Prismatic form, which is a 100% visual aesthetic that does not impact gameplay.
A Prismatic Card displays a custom Prismatic visual effect in-game, and a custom spawn and cast animation.
Each card found in a Spirit Orb has a chance to be automatically upgraded to its Prismatic form.


So disenchanting Prismatic cards give the same amount of spirit you need to craft a card of the disenchanted card's rarity. Basic Faction and Neutral Prismatic cards can now be earned by leveling up your Faction. 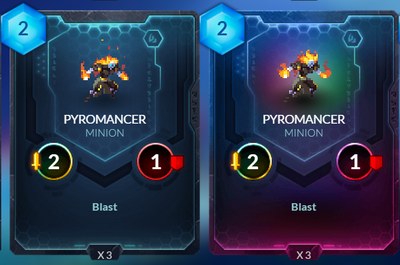