3. This rule is the one most likely to trip someone up! If there are enemies within attacking range but only after moving, a Battle Pet will move towards the enemy that requires the least number of tiles to reach for the attack. If there are multiple such enemies, it will choose one at random. Then as above, it attacks the closest enemy, prioritizing enemies on the same row or column. Note that this is different from moving towards the closest enemy; two enemies may have different distances but require the same number of tiles to reach. Screenshot 1 Screenshot 2 Screenshot 3

4. A Battle Pet will always take the shortest path towards its target. If there are multiple shortest paths, it will choose one at random. Screenshot

5. A Battle Pet with Ranged moves the same way as if it did not have Ranged (if it moves at all), and attacks the closest enemy. This makes its ranged effect not very useful as it does not keep its distance. Screenshot 1 Screenshot 2

6. A Battle Pet with Flying behaves as above, except there is almost never a case where there are no enemies within attacking range.

These Token Battle Pets can only be seen when randomly generated from Cards creating random Battle Pets. 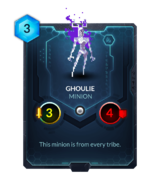